As a railroad clerk for the Denver and Rio Grande, Walter Wilson arrived in Lincoln Park in 1884, at the seasoned age of fifty-two. Although former territorial governor A C Hunt would soon be departing for Texas, Walter may well have met the man that was instrumental in bringing the D&RG to Denver through Lincoln Park, and for whom Hunt’s Addition was named.

With the help of an impressive streetcar network, the city’s population was exploding and development thrived well beyond the borders of the original congressional land grant. When the Union Pacific Rail Road first arrived in 1870, Denver contained less than five-thousand citizens. Two decades later the number exceeded one-hundred-thousand and the majority of Lincoln Park’s homes were already constructed. Except for a brief departure in 1895, Walter Wilson remained here in the neighborhood, working at the auditor’s office for the D&RG, and living in his two-story home with his family at 1032 Kalamath Street until his death in 1915.

Walter’s parents, Robert and Elizabeth came to the US from England in 1830 with their daughter, Mary Ann. Walter Wilson was born in Bedford, New York two years later. He had four younger sisters and two brothers. By 1850, the Wilson’s moved to Indiana, but Walter stayed behind and lived with another family in Ithaca, NY. At 18, he was likely earning his keep as farm hand.

By 1860, Walter graduated from Unitarian theology school in Meadville, Pennsylvania. He was ordained from 1862-1865 through the Unitarian Church of Pittsburgh. Walter was the church’s delegate to the National Unitarian Conference in New York, April 5-6, 1865, as the Civil War was coming to a close. From the published records of the convention the Unitarians present had strongly supported the abolition of slavery. The delegation further resolved:
“That while other denominations of Christians are beginning to feel their obligations to four millions of liberated slaves in the south, and to do their part to educate and christianize them, we, too, would be deeply impressed by the sense of our own duty to these poor and long afflicted classes of our common humanity, and we desire and purpose to fulfill our appropriate share of the work of lifting them up to to a higher level of civilized life and spiritual progress.”

It appears that Walter was inspired with missionary zeal, because on the 12th of April, he mustered in the Union Army. He served as Chaplain for the 117th US Colored Troops, an infantry division present when Lee surrendered to Grant at Appomattox Courthouse April 9th. Walter remained with the 117th, stationed in Texas from October 1865 until August 1867. He is honored alongside thousands in Washington DC, at the African-American Civil War Memorial.

From Texas, Walter headed back East to reconnect with his family in Indiana. The 1870 census reveals that Walter got married, and Hannah B. Wilson also lived with Robert and Elizabeth Wilson at that time. Walter’s occupation was listed as “Minister.”

By 1880, he was 48 years old, and had found more gainful employment with The Denver & Rio Grande Railway, perhaps through a connection made in the service. He and his wife had moved to Colorado Springs.

His first residence of record in Denver was 289 Buffalo, as noted in the ’84 City Directory. This would most likely be within a couple blocks from the tracks and the RR shops beyond them on today’s 9th Street. It may have been a temporary place offered by the railroad to help aid in the relocation of employees, or just a convenient rental while he found a more suitable home. They moved into their house on South Eleventh in 1885, which was still only about a half-mile from the D&RG shops.

It is interesting to imagine the neighborhood in Walter’s day. While he lived, a streetcar ran in front of his home to take him to town or across it. Despite the presence of this amenity, the small carriage house at 1032 Kalamath suggests he may have possessed a horse and buggy and driven his wife to Unity Church at Nineteenth Street and Broadway on Sundays. He was a member of Farragut Post No. 46, Grand Army of the Republic, a Civil War Veterans Association. Meetings were held every Saturday evening in Goody Hall, just a few blocks away at 8th Ave and Santa Fe. Hannah Wilson also served actively in the Women’s Relief Corps, an auxiliary to the G.A.R.

Then, Hannah died March 8th, 1893. She and Walter never had any children, but shared over twenty years together. She was buried in Fairmount Cemetery, Denver. This event undoubtedly had a great impact on Walter. He returned to Pennsylvania, presumably to reconnect with his friends from his old church.

On February 2nd,1895, in Allegheny County, Pennsylvania, Walter married Jane W. Marthens, a woman he had known twenty-five years before. Jane, also known as Jennie, accompanied him back to Denver, but may have had to wait before moving into her new home in Lincoln Park. Walter’s address is listed in the City Directory as 724 19th Avenue that year, so he likely rented his home on Kalamath while he traveled east, and had to take up a temporary residence uptown until his tenants were gone. Jane also became active with the Women’s Relief Corps.

Walter and Jane would have many guests living with them over the years. 1897 brought Jane’s father, Adolphus Marthens, and sister, Clara, to Denver. Adolphus was a thoughtful fellow, having published two books of prose, The Wavelet and The Fasciculus. Walter’s touching eulogy describes him as generous and unfaltering, “beloved by all that knew him.” His sister, Clara, got here and found a fella. She was married to John M. Murray in Denver September 24th, 1898. Sadly, she is listed as a widow in the 1900 census, when she is back living with her sister, father, and brother-in-law, but not found in any records after.

US Census records show that Walter’s sisters, Orpha and Elizabeth have moved into Walter and Jane’s home in Lincoln Park by 1910. Walter is the head of the household and still working as a clerk for the railroad. He continued to support the Unitarian Church and any family that could make it to Denver. His younger brother, Sherwood made it here to see him just before Walter passed away on February 3rd, 1915, at the age of 72.

His sisters both died before the year was over. All are buried at Fairmount Cemetery. Jane lived with others in the house, whether they were family, friends, servants or boarders until 1922. After 1923, there are no more records of Jane. She may have remarried, moved, or died, but neither Jane nor Jennie Wilson are buried in Denver.

Over a century ago Walter Wilson moved to Denver, settled in Lincoln Park, and stayed for the remaining thirty years of his life. Like many of his contemporaries, he was brought here by the railroads. Both the Union Pacific and the D&RG that run through the neighborhood are probably two of the biggest reasons for the city’s success and survival. Denver would not exist as we know it today if not for the railroads that reached here, the people it brought, and the industry and commerce that followed. Walter, Hannah, Jane, and Adolphus were like many of us today, Lincoln Park residents that tried, in their own way, to make the world a better place. Through them, we are reminded of the generous, hard-working, practical, and family-focused values that we still share. This story also reminds us how the timeless spirit of the worker that embodies La Alma/Lincoln Park has always been a part of our history. 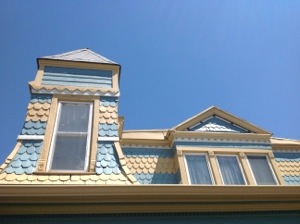